Serbia’s number-1 tennis player won the 20th Grand Slam title on Sunday. He defeated Italy’s Matteo Berrettani 6-7, 6-4, 6-4, 6-3 in the final of Wimbledon. With this, he equaled the record of 20 Grand Slams held by Roger Federer of Switzerland and Rafael Nadal of Spain. After the match, he gifted his final tennis racket to a young fan. Its video is going viral on social media.

Actually, this little fan had arrived with a poster during the match. In this, the meaning of each letter of Novak was explained. When he reached the little fan to hand over the racket, the audience cheered him. He also gifted a tennis racket to a fan at the French Open.

Fan wrote this on the poster-
N : No.-1
O : Outstanding
V : Victorious
A : Ambicious
K : Kissable 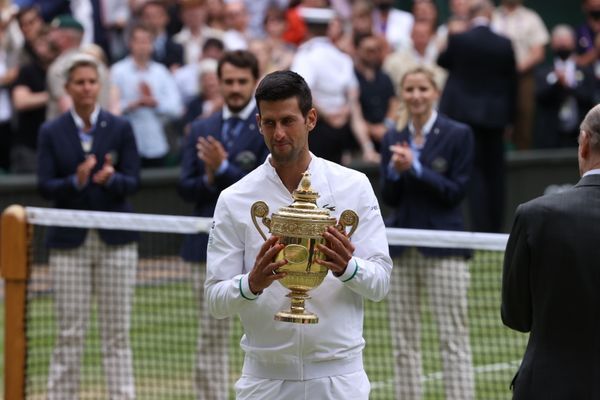 Djokovic wins all three Grand Slams of the year
Djokovic has won all three Grand Slams this year, the Australian Open, the French Open and Wimbledon. Another Grand Slam US Open is to be held this year. Djokovic is also its defending champion. If he wins the US Open tournament to be held in September, he will become the third player in tennis history to win a calendar Grand Slam. Earlier, Don Buzz did this feat in 1938, Rod Laver in 1962 and 1969.

Federer and Nadal congratulated Djokovic after the win. Federer said that I am proud that I have played a match with a champion player like you in the special era of tennis. You gave a great performance. Well done! At the same time, Nadal said that congratulations to you for the wonderful achievement of winning the 20th Grand Slam. I am happy that we are on a 20-20 Grand Slam title tie. Congratulations to you and your team on this.

Djokovic beats Bjorn Borg
Djokovic has become the third player to win the Wimbledon title for a record 6th time in the Open Era. In this case, he has left behind Swedish’s Björn Borg. So far Roger Federer has won the Wimbledon title 8 times and Pete Sampras of America 7 times. Djokovic won the title by defeating Federer 3 times (2014, 2015, 2019) in the final of Wimbledon.